GUIDE TO THE NAMIBIAN ECONOMY 2017

The fourth edition is published a full generation after Independence and ever closer to the year 2030, the year chosen by Namibia’s SWAPO Government as the date by which Namibia should have caught up economically with the industrialised world in terms of income per head. As the book lays out, there is no doubt that many successes have been achieved in these first twenty-five years. In broad economic terms, the economy has grown almost every year since 1990, perhaps by an average of 4% a year. With the population growing by 1.4 percent a year, on average Namibians have become better off. Two or three percent a year compounded over 25 years represents a significant improvement in average living standards. Other official statistics documented in later chapters appear to bear this out. However one juggles the figures (and the IPPR has been in the forefront of scrutinising the data that exists), it does look as if poverty and extreme poverty have declined – even though inequality may not have changed as much as first believed. Furthermore, poverty has declined during a period when the young nation was dealt a severe early test in the form of HIV/AIDS, the impact of which has been painful and protracted and has been the main reason for the reduction in life expectancy since 1990.

The number of countries in Sub-Saharan Africa which can boast such a track record of economic success – especially those emerging from long and bloody struggles to rid themselves of the colonial yoke – are limited if they exist at all. This alone makes Namibia a very special case. Added to the fact that Namibia has successfully held five democratic elections deemed by most observers to be generally free and fair and that the ruling party has successfully engineered a handover of power not only from a popular Founding Father to a unifying successor but also then to a third President who does not come from Namibia’s majority ethnic group (and who chose to leave Cabinet after a disagreement with the Founding Father) only adds to Namibia’s record. Hage Geingob won the presidency with 87 percent of the popular vote after 25 years of SWAPO Government. And this was achieved while Namibia is consistently ranked highly not only by African but by international standards for standards of media freedom. On the face of it then, a remarkable economic and political success.

And yet, for those who believe in the power of good economic policy, it is hard to pretend that all is well. Despite steady economic growth, poverty and inequality remain firmly entrenched primarily because the economy has failed to create enough jobs. Namibia’s record on employment and perhaps especially formal employment lags far behind what is required to make a significant dent in the twin ills of poverty and inequality.

Part of this is because time and again Government has introduced policies which have not been based on rigorous research and analysis and therefore not been properly thought through. After 25 years it is hard to say where the critical analytical thinking takes place within Government and which analysts or researchers ministers consult before agreeing to new policies, laws and regulations. Politicians seem to continue to believe that everything is political. As a result policies are often badly designed and therefore fail to achieve their objectives or end up being reconsidered but only after a long period of uncertainty during which economic agents are unsure about what is likely to happen. Fortunately, Government has shown that it is still willing to listen to criticism when the stakes are high enough. This is Namibia’s saving grace. However, considerable amounts of time and energy (not to mention credibility) could be saved by better analysis and consultation before new policies are launched. The Employment Services Act and the National Equitable Economic Empowerment Bill are two recent examples of policies that have the potential to seriously dent the economy’s ability to create jobs – surely Government’s number one priority.

The public sector remains an enormous part of the economy yet its cost is huge and its effectiveness questionable. Its size alone means that the national budget takes on even greater importance than it does in other countries. Yet public spending is subject to no consistent cost benefit analysis and meaningful public sector reform is not on the agenda. Membership of SACU continues to allow Namibia to maintain this situation but that means these precious revenues go towards keeping the country locked into dependence and also effectively block wider goals such as SACU enlargement and greater regional integration.

Furthermore, after 25 years Government continues to show extraordinary faith in its own ability to successfully intervene in the economy and seems to believe that Government committees can deliver economic change despite overwhelming evidence to the contrary. The President’s Economic Advisory Council, the State- Owned Enterprises Governance Council, the National Planning Commission, the Employment Equity Commission, the Value Addition Committee and others are clear examples which have added little to the country’s economy. Government continues to prefer to establish new bureaucratic structures and institutions rather than reforming or eliminating existing ones. The economy has grown primarily because FDI continues to take place on a significant scale but this has come about generally despite rather than because of Government intervention.

Linked to this is the almost universally poor performance of Namibia’s public enterprises, the most important of which have generally been poorly managed and suffered from endless political interference. Given that these are the institutions responsible for much of the nation’s critical infrastructure, this does not bode well for long-term growth. In agriculture, fishing, mining, water, electricity, tourism, transport, and banking, public enterprises have, with possible limited exceptions, at best contributed little to development and at worst held it back altogether.

To these areas of concern can be added that of corruption. Thirteen years after its founding legislation has been passed, the Anti- Corruption Commission has yet to successfully prosecute anyone in Government much higher than a school teacher. No one believes this is because Namibian public servants are somehow different to every other country. Everyone knows it is much easier to stop the slide into endemic corruption than to rectify it once corruption is rife. Black Economic Empowerment rightly seems to have created a class of rent seekers who line their own pockets rather than genuine entrepreneurs who create thriving businesses and thereby create jobs.

More disturbing, perhaps, is the breath-taking lack of debate on some of the most important economic policies. Aside from the fact that ministers’ fortunes rarely (if ever) depend on performance, Parliament, with its almost built-in executive majority, looks unlikely to play this role in the foreseeable future. Opposition parties meanwhile remain weak and divided and incapable of holding the executive to account. Parliamentary committees add very little to Parliament’s teeth while the reports of the Auditor General (which have often been so late as to be irrelevant) go almost unnoticed. Public institutions such as the National Planning Commission, NEPRU, UNAM, and the Bank of Namibia Research Department as well as ad hoc initiatives such as the President’s Economic Advisory Council have failed to provoke the hard thinking necessary for improvement.

In policy terms then, Namibia’s first 25 years leave much to be desired. Indeed, Namibia appears to be living proof that an economy can grow and even prosper in the absence of economic input into policy-making and effective public institutions. Certainly, interest by foreign investors in Namibia through the years since the Global Economic Crisis has held up well, which has been the foundation upon which growth in the wider economy has taken place. Yet policymakers should not fool themselves. Namibia has continued to attract FDI because it has not yet permanently damaged international investor confidence (despite coming perilously close on several occasions). Yet this success should not be confused with more deep-seated structural transformation of the economy. Indeed, as Namibia completes a generation of sovereignty it looks set to become ever more dependent on its much maligned mining sector.

As stated above, Namibia has already achieved something historic. Many politicians still like to dwell on the country’s inheritance of racial strife. Yes, the poisonous legacy of apartheid remains a massive obstacle in the way of progress and keeps the country from looking forward rather than back but it must not be allowed to be the reason why progress is derailed. The reality is that Namibia enjoys a host of advantages which many other countries would envy: a long coastline, a great climate, abundant natural resources, stunning landscapes, good infrastructure, reasonable levels of public debt, a functioning civil service, a sophisticated legal and business infrastructure, friendly neighbours, and the goodwill of virtually every other country in the world. The ruling SWAPO party has enjoyed a generation in power and this looks set to continue into the distant future. Yet continuing on the same path as the last twenty-five years for the next twenty-five years is unlikely to yield anything very different: modest growth based on a vibrant mining sector that benefits the fortunate few. It could be worse. But policymakers should surely be asking: shouldn’t it be so much better?

The Guide is Published by the Institute for Public Policy Research (IPPR).

The Guide to the Namibian Economy is available from the IPPR at the House of Democracy, 70-72 Dr Frans Indongo Street, Windhoek.
Price: N$250 (N$150 to students with student cards).
Further details: Salmi Shiguedha on +264 61 240514 or info@ippr.org.na 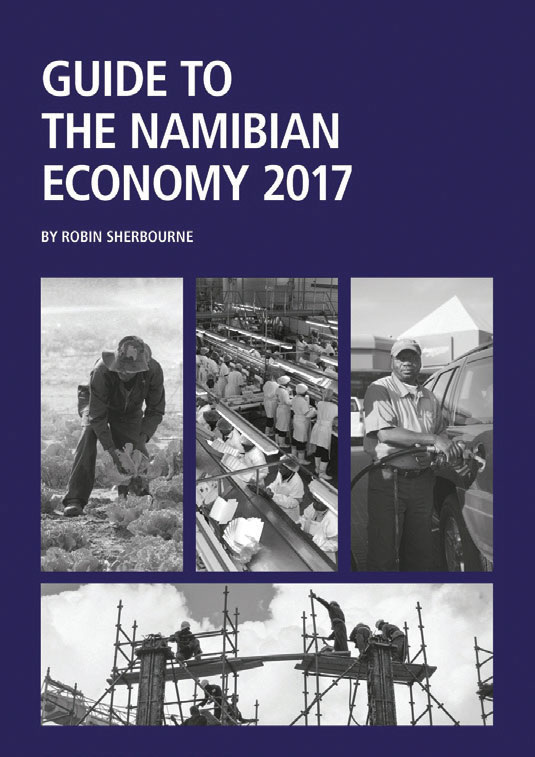