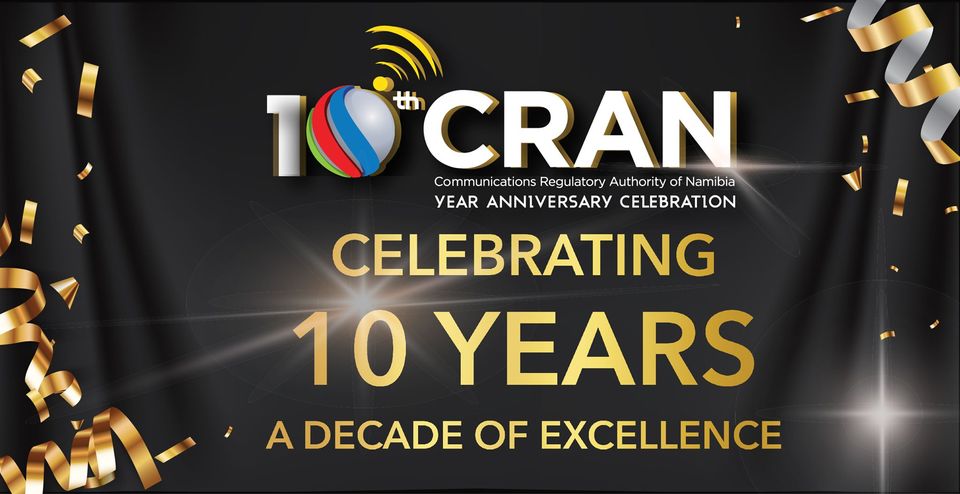 The Communications Regulatory Authority of Namibia (CRAN) is an independent regulator established under Section 4 of the Communications Act (No. 8 of 2009) to regulate, supervise and promote the provision of telecommunications services and networks, broadcasting, postal services sectors, and the use and allocation of radio spectrum in Namibia.

MISSION:  To regulate the ICT and Postal sector for the socio-economic benefit of all Namibians.
VALUES:

Since its inception, CRAN issued 41 telecommunications service licenses, providing a wide array of services throughout Namibia. CRAN also established a firm regulatory framework for the Digital Terrestrial Television (DTT) switchover process and formulated a comprehensive frequency-channelling plan, which other SADC regulators are using to benchmark.

CRAN reached another milestone when it ensured that 120% mobile penetration rate in the country was reached. This was achieved because there is an established regulatory framework that creates an environment that promotes fair competition. CRAN also facilitated the extension and digitising of the ICT infrastructure, and the introduction of the 4th generation (LTE) technology in the country.

CRAN also completed the study on numbering plan and number portability for Namibia. Once implemented, consumers can move from one network to another with ease.

CRAN is governed by a Board of Directors with six members who adhere to the King IV Code and NamCode on Corporate Governance. The Chairperson provides guidance and ensures all decisions taken by the board are in the interest of CRAN and its stakeholders. The Board of Directors are appointed by the Minister of Information Communication and Technology in consultation with the Minister of Public Enterprises. CRAN is led by the Chief Executive Officer, Emilia Nghikembua, who is supported by the following head of departments: