MISSION
Develop, manage and operate safe and secure airports on sound business principles with due considerations for the interest of our stakeholders

The NAC is a national corporate member of the Namibia Chamber of Commerce & Industry (NCCI), and given its central role in the tourism sector, the NAC has representation on the Marketing Committee of the Namibia Tourism Board.

MANAGEMENT
Six Strategic Executives who report to the CEO head the following departments:

The second category is comprised of domestic airports,

which have air services between Namibian towns in Windhoek’s Eros Airport, Katima, Ondangwa, Luderitz and Rundu.

In 2017, NAC saw the advent of Eurowings Airlines, a subsidiary of Lufthansa Airways as well as the ground work for the construction of the a of Fuel Service Station at HKIA to National Petroleum Corporation (NAMCOR) with the expected operations set for July 2018.

The past three years have seen the increase in airlines calling at HKIA to ten (10) despite the limited resources at the Airport.

To this end, the only shareholder in NAC, the Government of the Republic of Namibia, has set in motions plans and projects to accelerate the development and expansion of infrastructure at the country’s flagship airport.

WALVIS BAY INTERNATIONAL AIRPORT
Walvis Bay is a key economic driver of the Namibian economy, in order to support fishing companies and in line with the growth at home strategy, Walvis Bay International Airport is developed into a fully-fledged international airport with a special focus on cargo transportation.

Walvis Bay International Airport is equipped with the entire necessary infrastructure in order to facilitate air transportation of sea based products. The airport terminal (at a cost of N$ 100 Million) and the runway are competed.

Rehabilitation and upgrade of the runway is complete and upgraded to Category 4F and so is the construction of Polymer Fencing at Walvis Bay (at a cost of N$ 37 Million).

EROS AIRPORT
There are also plans to develop hangars and aircraft maintenance warehouses through Public Private Partnership’s initiatives. In addition to a new rescue & fire station was commissioned in 2016, the airport is expecting a total rehabilitation and upgrade of the runway. 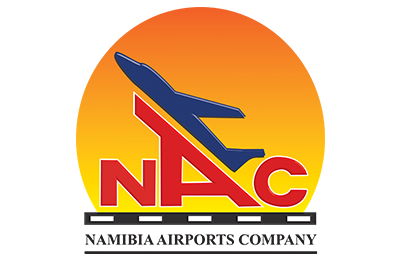