SUPPORTING THE GROWTH AND PERFORMANCE OF NAMIBIA’S ECONOMY.

new container terminal will contribute substantially to Namport’s becoming a critical player in the growth of the African continent.

The first phase of the northern development located 5 km north of the current port of Walvis Bay is also currently underway. This development will form an important part of the Namibian Logistics Hub Project, which will position Walvis Bay as a major gateway to landlocked countries in the SADC region.

These two expansion projects are set to increase Namport’s relevance in regional trade even more. Namibia’s connecting transport corridors enable the country to compete as a logistics hub for regional and international trade between the SADC countries, Europe, Asia, the Americas and the rest of the world.

Indeed, Namport has become an agent for change, enabling the country to be one step closer to realising its vision of a logistics hub in the SADC region.

THE FUTURE IS CHANGING
However, ports in other countries in southern and western Africa are also expanding their facilities at a rapid pace, and planning major developments linking up to trans-African corridors by rail or road.

As more mega-vessels are being built for the major shipping lines, there is an urgent need for regional ports to cater for larger container vessels. For Namport to remain relevant, we need to gain an advantage by having suitable infrastructure for these larger vessels at our ports without delay.

While major development will put enormous pressure on limited funds in the short and medium term, it is an exciting business opportunity for the country, as additional container volumes will bring job opportunities and economic growth. Africa’s young and growing population are the consumers of tomorrow who will increase demand for sophisticated imported goods, and develop products for export.

TECHNOLOGY CHANGES THE FUTURE OF PORTS
As the world is moving into the Fourth Industrial Revolution where technology is developing at the speed of light, the impact of technology is already felt in the ports and shipping industry. With automated port terminals where automated vehicles and machines “talk to each other” and cargo vessels without a crew being controlled by “drone ships” in development, it is clear that technology will play a major part in the future of ports.

A technologically rich environment has the power to improve efficiency and productivity, while at the same time reduce costs. Namport’s current business plan has a heavy focus on process improvement through automation, with several more process-improvement initiatives underway. Indeed, exciting times lies ahead.

DEDICATED AND WELL-TRAINED EMPLOYEES
Namport’s employees form the backbone of all our operations. We are well aware that technological advances will require that future job positions are populated by digitally literate employees.

Namport places great emphasis on ongoing skills development and offers bursaries to both full-time and part-time students (studying courses pertinent to Namport’s business) and promising apprentices. Currently, the focus for human resources management at Namport is twofold, namely on preparation for manpower provision for the new container terminal, and developing the existing workforce to its full potential. 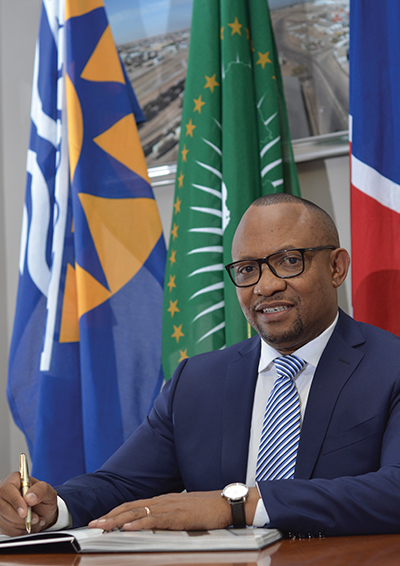